Speaking to David Oakes at Murlough National Nature Reserve in Northern Ireland back in January 2020, the young naturalist Dara McAnulty provides a unique perspective upon a number of social concerns.

Dara McAnulty is a 16 year old naturalist and writer from Northern Ireland. His love for nature burgeoning at a young age, he began collecting feathers from his garden floor in Belfast. Compelled to share this passion, he began writing a wildly successful blog, joined the likes of Sir David Attenborough as an RSPB Medal winner, received the BBC Springwatch Unsprung Hero Award and has become an ambassador for the Jane Goodall Foundation. His first book, ‘Diary of a Young Naturalist’, is a brave nature-infused coming-of-age story that not only delves into his love of the outdoors, but also his autism and battle with mental health. We join Dara at Murlough Nature Reserve as he walks along the winding paths of sand and forest, marvelling at the flora and fauna – including the troublesome sea buckthorn. Funny, articulate and humble, do not let his age fool you, Dara is passionately knowledgeable and explores issues of conservation, education, the global stock markets and even the possibility of mining the moon. This conversation will help you to reassess the world around you, “Stop. Go outside, and just stare at the ground for a little bit, and take in all that you see”.

Back in January I read a proof copy of Dara’s new book, “Diary of a Young Naturalist”. It was my companion as I drove through England, as I spent a few nights in a B&B in Wigtown (Scotland), whilst aboard a Stenaline car ferry off the north-coast of the Isle of Man, and again in another B&B, this time in Newcastle (Northern Ireland). Whether sluiced across stormy seas, or seated at a doily-laden table-cloth (embarking on what was rapidly becoming a battle for national B&B superiority through the medium of the tastiest fried bread), I was not expecting to read of a man prepared to share so much, so bravely, with the world at large. I read about Dara’s autism, his being bullied at school and of the lifeline that the natural world was throwing him. 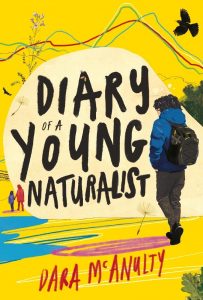 meeting Dara – having travelled through three countries and a third morning of fried bread – I little thought he would be giving me trading advice or suggesting that mining the moon might not be a bad idea. But Dara possesses a bold focus and determination at exactly the time the world seems most prepared to heed it. And it is glorious!

The rapidity with which Dara’s voice has been embraced by the “Natural History Establishment” (please submit appropriate collective noun here… “an eerie of environmenstlists“, “an oxbow lake of outdoorsmen“, “a nomenclature of naturalists“?) is telling on two points. One: Technology now enables one voice to sing louder than thousands, and; Two: We are hungry for passion again. Dara, along with many other members of the current global environmental youth revolution, are injecting much needed vim back into the debate.

I’m not saying that everything Dara espouses is worth pursuing – for example, I do not think we should mine the moon, and I’m pretty certain Dara doesn’t want us to either – but his concerns about natural resources and waste disposal are certainly valid. What I am saying is that I believe people in a position of power should listen to those untainted with the cynicism of a life lived (but perhaps it’s enough just to say that I think people in a poisiton of power should listen.) They should heed the fears of those with many decades ahead of them, who are standing upon a world that needs changing. Any perspective that helps us reconsider our place on this planet can only be a good thing, especially now. This “pause” in society, whilst we deal with the COVID-19 pandemic, offers us a chance to consider the planet deeply before we fling planes back into the air and recommence global industrial practices. (Or perhaps that opportunity has already elapsed?)

Last week, I heard a man on the radio espouse a tricky pill to swallow. He suggested that the isolationist and nationalistic views of the Right occassionally converge with the views of the (more often than not left-leaning) Green agenda. For example, why manufacture in another country when you could make production centralised and in the process reduce the aviation footprint (and indeed have greater control over ethical working standards.) “Green and patriotic!” Whilst Nationalists are decrying unwanted immigration and Environmetalists espouse flying less often, both sides may well find it terribly uncomforting to find themselves seemingly in chorus upon select issues. Personally, I believe greater collaboration between people, and indeed nation states, is the secret to a healthy global society and a healthy planetary environment. As such – environmentalist or nationalist, old or young – considering a problem from another’s perspective may provide a solution to benefit us all.

This podcast is all about differing viewpoints – presenting human nature’s interconnected biodiversity if you will. As such, if you’ve been a follower since the beginning, you’ll have heard from a beef producer the week after hearing from the founder of PETA; you’ll have heard from an amateur fossil enthusiast decrying the scientific community’s archaic ordering of specimens, before then hearing from the recent executice secretary of the International Commission on Zoological Nomenclature. I am hoping a truth can be found in balance. It is fitting then to have Dara on the podcast; as the youngest recipient of the RSPB medal, there is a wonderful symmetry with one of the more senior guests on the show, Sir John Lawton, who was also a recipient of this incredibly respected award. Both men offering views of importance upon our one planet. I hope Dara and John, and indeed all my other guests, offer you food for thought.

Book – “Diary of a Young Naturalist”

Massive thanks go to Elinor Lawless for lending her dulcet tones to the reading of Seamus Heaney’s poem.

(Just want to hear poetry? Then skip through to 00:21:15 – and be sure to check out our “Curlew” episode for poetry recitals by Natalie Dormer and Samuel West too.)

Banner image for this episode is the from atop Slieve Donard, the highest mountain in Northern Ireland, and taken in the hours following the recording of this interview.

Ingrid Newkirk: One woman and ‘Animalkind’; the tale of PETA’s rabbits

Brigit Strawbridge Howard: As busy as a bee, whilst remaining humble as a bumble