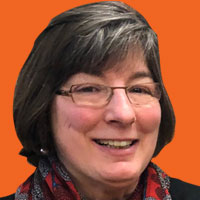 Dr Ellinor Michel is a molluscan systemetist and ecologist at the Natural History Museum and chair of the Friends of Crystal Palace Dinosaurs. Her work focuses on malacology (the study of molluscs), taxonomy and nomenclature, and the ecology of the Great Rift Lakes of Africa. In this in-depth conversation, she describes how a snail’s spiral shell is a “magical world” etched with secrets of our past, discusses the “important yet painful” process of the human appetite for knowledge, and explains how fossils have helped her cope with her slug phobia.

I’ve never had a keen interest in mollusc, but I do now – and it’s all thanks to Dr Ellinor Michael.

Talking to Ellinor was gloriously eye-opening – at times I felt like self-imposing a set of Clockwork Orange-like eyelid-pincers in case I missed an iota of the wisdom she shared. Since we spoke, I’ve been regaling (to any and everyone that will listen) how the accretion of a snail’s shell records time and space like a vinyl documents the notes of a recording artist. I truly hate that this fact, seemingly so obvious once you know, is something I had never even stopped to consider. CRUNCH “Oops, never mind,” has now shifted into CRUNCH “OH MY GOD, I JUST SET FIRE TO A PREVIOUSLY UNDISCOVERED FIRST FOLIO OF SHAKESPEARE!!!”

How many other stunning truths like this pass us by?

I deliberately released this episode the week following Steve Etches’ episode; not to be inflammatory, but to show how two seemingly opposing views of our fossil records, of taxonomy and of the creatures that have occupied our planet’s waters, provide two equally as fascinating approaches to committing our lives to the mysteries of our planet. Both Steve and Ellinor, both delightful to talk with, couldn’t have been more different. But I hope you agree that this planet is far better off having both their approaches to investigation rather than simply one.

(I’d be lying if I said that I didn’t want to throw a dinner party and seat them next to each other!)

One of the real perks of going to the Natural History Museum to record this interview with Ellinor was to see how much work the Museum does as a place of active scientific research. Beneath the animatronic dinosaurs is a world populated by people who have devoted their lives to studying the thinnest slices of our planet’s ecological make-up. Indeed the number of follow-up discussions which Ellinor suggested I should have with her contemporaries in both the fields of malacology and taxonomy made me realise that the more scientists I talk to on this podcast, the more it will highlight my ignorance of the world I live in. I should probably stop now, before I get too carried away…

I received an email from Ellinor a few days ago, it was as long as any essay I ever wrote at university, and continued to highlight the difference between taxonomy and nomenclature. She showed how they are vastly different approaches to ordering the natural world, and how they’re antagonistic partners, much like Ellinor and Steve. It reinforced to me that the depth of her scientific research cannot (and should not) be condensed into a 45 minute podcast. TAC is designed to be relaxed and informal rather than a replacement for a scientific seminar, and I truly hope that my short record of some of a Ellinor’s thoughts may inspire some of you to delve further into nomenclature, malacology or even into concrete dinosaurs.

FRIENDS OF THE CRYSTAL PALACE DINOSAURS: