The second of a set of interviews with three "Wildflower Women", David tours the Woodmeadow Trust with its founder, Rosalind Forbes Adam. 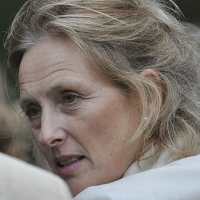 Rosalind Forbes Adam is the founder and project leader of the Woodmeadow Trust in York, formerly the Hagges Woods Trust. The idea of “raising tomorrow’s ancient woodland” was born from a question all husbands have surely asked their wives at some point – “do you want to make a wood?” The concept of the wood has changed since the idea first emerged. Rather than looking 400 years into the future, the aim now is to address something much more immediate – the catastrophic decline in biodiversity in the UK. In this episode, full of wonderful words of wisdom, find out how Ros hopes to create a link of habitat meadows between the River Ouse and the River Derwent, why wood meadows are not just beautiful, but ecologically practical, and learn how Ros is inspiring others to turn their fields or lawns into similarly “wild” environmental landscapes.

“When I see Earth, Kees, I mean people. Men. You worry about deer and trees and fibreweed, fine, that’s your thing. But I like to see things in perspective, from the top down, and the top, so far, is humans. We’re here, now; and so this world’s going to go our way.”

Capt. Don Davidson in “The Word for World is Forest” by Ursula K. LeGuin

One can riddle the act of planting and growing with metaphors for life, and indeed there’s much in this episode that seems to imply greater resonance. This episode is not simply the story of “one woman growing a woodmeadow as part of a rewilding and education project”, the Woodmeadow Trust is an idea.

Almost a year since recording, listening back, I’m struck by the themes of order and priority. How do things form? What comes first? Does wildlife require impetus from the top, or, shoul  it be left to its own devices? Will nature simply find a way? Unsurprisingly, as soon as you attempt to answer these questions, many further queries are raised, so forgive the more rambling blog entry this week. But, then again, who doesn’t enjoy a ramble through a woodmeadow?

As Ros says, she is very much activating a “bottom up” way of creating her natural paradise. Regenerate the soil and the earth will easily support the seed stock of grasses and wildflowers. Get that sorted, and the insects come, then the birds, then the larger predators, and then you have an ecosystem. Bottom up. And it’s working REALLY well. My proof: upon arriving to meet Ros, I was initially greeted by a conservationist returning a wild grass-snake to safety – it had been temporarily sequestered to enthuse a group of youngsters about the wonders of the wild! 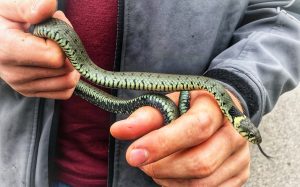 A film I watched recently, “The Biggest Little Farm”, is a documentary very colourfully highlighting the manner in which soil can be rejuvenated and, after a number of years of toil and a lot of lessons learnt the hard way, manifest a complicated ecosystem that creates a harvest to feed a local population. (Watch it, it’s great.) Ros and the Woodmeadow Trust aren’t hoping to farm their land, but the route to reaching their goals are the same as those at Apricot Lane Farm. Their reward (alongside the ecosystem) is the passing on of lessons learnt to the community. Their crop is education. But, ultimately, one thing feeds into the other, just like at Apricot Lane, and it all starts with soil health. Bottom up.

For why soil is so essential, let me set you some further reading in the shape of Janine M. Benyus’ “Biomimicry” and Tony Juniper’s “What has nature ever done for us?” – which Rebecca Speight recommended in her interview with this podcast. Both books go into great depth about the ecological and economical arguments behind healthy soil, mass biodiversity and healthy ecosystems.

And then there’s us, the humans, with the priorities of Capt. Don Davidson.

Whether one is creating a crop of apricots, or a crop of education and biodiversity, in our society one needs input from the top. Ros speaks of getting funding from the Forestry Commission and bringing in a host of expertise. Thanks to her husband’s romantic gesture she is also lucky enough to have easily freed up a plot of land – taking it away from a “human as priority” agricultural past. As we have now deviated so far from a “natural habitat”, to start a project like this, a big dose of “top down” impetus was needed. Human graft, funding, expertise, council applications, loopholes, tick-boxes, romantic spouses… Top down.

So which is it? Top down or Bottom up?

As Eanna Ni Lamhna and Jo Elworthy both attest to in their discussions with me, interconnectivity is key. As Eanna says, farmers follow the subsidy, and the same is often true for those in the environmental sector. Funding is key for any idea to take root. Commercial or Conservational. But, if only the Government took a green lead on agriculture, then public funds could be freed up accordingly – both farmers and conservationists could then follow suit with a plan for our soil that benefitted the human and the habitat (and many could even say, “Screw the human. Fix the habitat and the human will be well catered for.” I point you towards chapter 2 of Benyus’ book mentioned above, for a more eloquant phrasing of those sentiments.) Top Down leadership, with bottom up goals.

One thing I hadn’t considered, which Jennie Martin touched on with me when I spoke to her for last week’s episodes (which I ultimately edited out as it’s something I want to explore with her in greater depth when we finally get to meet and walk and forage together) was that wildflowers themselves are often a by-product of human agriculture. Indeed, the idiosyncrasies of the rolling British landscape are irrevocably marked by humans. In addition, as Ros says, a number of her re-introduced wildflowers at Woodmeadow are species that are not technically accurate for the location. Fingerprints still remain even with the best intentions. Even in our greatest hopes at restoring nature, it is often impossible to remove the fingerprints of mankind.

On a side note, this reminds me of a drama lecturer at Manchester University trying to explain the difference between Realistic Drama and Naturalistic Drama. In theatrical terms, the difference between what is real, and what is a representation of real. One could suggest that there are two types of potential rewilding exercises – ones inspired by Naturalism, and those inspired by Realism – what is natural, and what appears to be what we think of as natural.

In the past, pre-herbicides and pre-pesticides, Ros says “everyone had clover in their lawns…” (I remember it well. But I don’t remember when the clover vanished.) “…but children become habituated to a downgraded landscape.” We don’t miss what we don’t see, and we take what we see as the baseline. Ros believes it’s important to place some plants in the ground – whether naturalistic or realistic – for her, the wildflowers in her Woodmeadow are the baseline. Whether the bottom up is illusory, or the top down entirely negligible, it matters not. As long as there are plants in the ground, our children will find it easier to maintain a balanced order of things, and learn from our mistakes.

The wildflowers Ros points out during the podcast:

Doug Allan: A witness beneath the waves on World Manta Day