The first of a set of interviews with three "Wildflower Women", David asks ethnobotonist, Jennie Martin, about how best to explore the natural world on our doorstep. 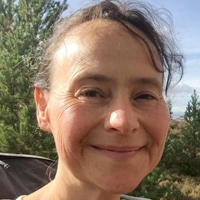 Jennie Martin is an ethnobotanist and conservationist with a particular interest in ethnomycology and nature literacy. The founder, and 15 year executive director, of the award-winning charity ‘Wild things!’, Jennie has designed and delivered a variety of programmes that support conservation and nature connection, from habitat restoration projects to projects that support the elderly in accessing the great outdoors. When David first made contact with Jennie neither of them were aware that, beyond an interest in botany, they had something in common; Jenny was a student of David’s Great Aunt, a woman who is, Jennie says, one of her heroes! In this interview, Jennie explains the difference between botany and ethnobotany, extols the virtues of fungi, explores the topic of traditional knowledge, and suggests a number of ways to connect with nature – but whether it be foraging or forest-bathing, she asks that you do it sustainably and safely. Whether you’re easily seduced by nature, or you need help focusing in, Jennie’s overarching message is simply to get out there and to take it in!

Last autumn I was walking my father’s pet spaniel, Sammy, around a sodden piece of common land in Dorset. Sammy, soaked with September rain (and already starting to honk with that wet-dog fug we all know and love), was snuffling around like a truffle hound. Without warning, he suddenly vanished within a small copse of hawthorn trees. Heading in to seek him out, I found myself distracted, stunned, awed. Littered throughout the shady bower, shooting out from amongst the rotting leaves, were tens of the brightest, most toadstooly toadstools I’ve ever seen. 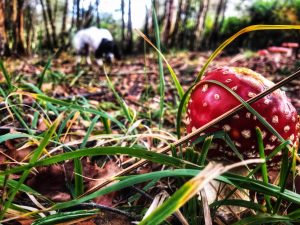 Fly Agaric is probably the most recognisable of toadstools. Brownies shelter beneath them, Alice eats them in Wonderland. It is also thought that its distinctive colouring led to the Victorians adopting it as inspiration for Father Christmas. Anyway – I’ll leave you to research them further for yourselves. I’ll just warn you briefly – DON’T EAT THEM! Very bad.

When talking to Jennie at the end of the podcast about which “fungi I fave”, it is this particular dogwalk in Dorset, as well as a stroll with a best friend in Burnham Beeches shortly before Christmas, a deer-laden photo shoot in Bushy Park for the Sunday Times, an interview part conducted in Kew Gardens, and my regular daily meanderings around the Crystal Palace Dinosaurs to which my mind was turning. (You can almost certainly work out the exact dates by scouring my instagram feed from the tail end of 2019). The point I’m trying to make is that whenever one is lucky enough to find fungi, it is not simply the joy of discovery, but the manner in which the moment becomes indelible upon one’s memory that makes mushrooms so special – they’re a pin not easily removed from the map. The thrill of the find defines a moment in time.

To that end, it is no surprise that someone like Jennie, who loves the ritual and hunkers for uncovering human relationships with botany, should have such a particular fondness and respect for mycology.

I wish you all successful foraging, and please do respect the idea of an “Honorable Harvest” and the SSC code for safe foraging.

I hope to bring you a proper forest bound episode with Jennie soon, but until then I’ll leave you with some of Jennie’s favourite fungi.

The Art of Trees: Live from the Cheltenham Literature Festival and the Woodland Trust

Peter Wohlleben: The hidden life of the ‘Green Sheep’ who wanted to become an Ent