Actress Serena Manteghi joins David upon the banks of the River Ouse for a chat about Shakespeare and the secret language behind the sepals, in the final of three interviews with "Wildflower Women". 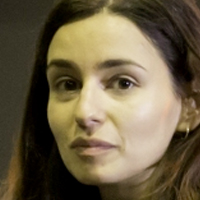 A scene of Shakespearean serenity unfolds upon the banks of the River Ouse (if you can excuse the sounds of nearby building works!) Serena Manteghi played Ophelia to David Oakes’ Hamlet late last year, a role punctuated by one of the most well-known pieces of poetry about flowers. In this conversation, the pair muse over the mythology of the flowers that are highlighted in Ophelia’s infamous Act 4 speech. From rosemary (for remembrance), to pansies, fennel and violets, learn what each flower signifies and why Ophelia might not be so mad after all.

There’s rosemary, that’s for remembrance. Pray you, love,
remember. And there is pansies, that’s for thoughts…
There’s fennel for you, and columbines. There’s rue for you,
and here’s some for me. We may call it herb of grace o’ Sundays.
O, you must wear your rue with a difference! There’s a daisy. I
would give you some violets, but they wither’d all when my father
died. They say he made a good end.

The “Rosemary Speech” in Hamlet is perhaps the most famous speech performed by a female character in the whole of Shakespeare’s canon – if not in all of theatre. I remember talking to Serena in the early days of rehearsals about whether she knew what she was going to do with the speech, but, other than having done a host of research into the language of flowers (as you hear in this episode), she was game to see where the director and her co-cast would lead her. 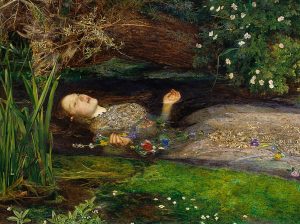 I cannot remember whose idea it was exactly, but her Ophelia – very deliberately, overtly accusatory – was to hand each flower to a specific character. Each flower presented as a gift, a curse, a warning. Each flower conveying a message. Far from a whimsical departure from the world of the living, silently slipping amongst the frogspawn into the babbling Milais-ian brook dressed like a pre-Raphaelitic princess, Serena’s Ophelia was to use flowers to make a statement. This Ophelia was offering up one final opportunity for the sinners of Elsinore to repent. This was not a last will and testament written in pollen. This was their chance to prevent yet another needless tragedy. This would not have been an option open to Serena without knowing the hidden language of flowers. Everything starts with research (unless you’re lazy!) But research isn’t just about reading books.

Last Summer, we rehearsed “Hamlet” (and indeed the 7 other Shakespeare plays in our company’s repertoire) out of town, south of the York city centre. And for those of us who were prepared to rise early enough and to commute by foot or pedal, it meant you could walk or cycle the 3 miles from York Minster, due south, directly along the banks of the River Ouse. We rehearsed 6 days a week for just over 6 weeks, from May through to July. Watching a riverbank flourish from Spring into Summer was one of the perks of the job. Horse Chestnut pollen candles thickly ablaze. Families of increasingly boisterous cygnets. A repopulation of iridescent tansy beetles. A warren of the floppiest bunnies occupying the meadow just before reaching work. Each day brought something new. I know Serena walked that walk into work often. I find it hard to imagine that in some way it wasn’t this particular riverbank that her Ophelia was to sink into.

This lockdown, as with that Summer in York, I have been rewarded with the view of one landscape, daily, over a prolonged period of time. I have seen flowers come and go. Birds and insects hatch. I’ve seen carrion slowly decay. To take the time to slow down and observe is an incredible gift. Done correctly, you can discover that a flower isn’t simply a flower, that rosemary isn’t just for roast lamb. The world is riddled with deeper meanings.

Éanna Ní Lamhna: The force of nature teaching teachers about the Emerald Isle