David drives to Devonshire to meet the moth-enthused printmaker, Sarah Gillespie, and hears how she emerged from her chrysalis 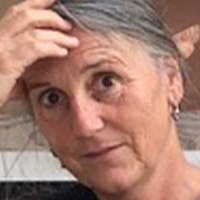 Working from her Devonshire studio and the surrounding natural habitats, artist and printmaker Sarah Gillespie, in looking carefully at our wild world, can’t help but sense the sentience of nature looking right back at her. Raised by two artist parents, and having been blessed with at least one truly inspirational teacher, it’s perhaps not surprising that Sarah is now an acclaimed Royal West of England Academician, and most recently was asked to collaborate with Cambridge University’s Conservation Initiative. But, like a moth emerging from its chrysalis, her journey to this point was not a straight forward one. In this episode, Sarah joins David to discuss the value of Art, and the value of Moths. Whether an oil-painting or a modern NFT, she explains how Art struggles for a place across racial and class divides, and also has to accept that it too has a carbon footprint. Increasingly confronted with these concerns, Sarah turned her artistic output on its head. Currently working upon a collection of mezzotint prints of “…the deeply unloved” – Moths – Sarah sees her art as: “…one of erosion; working with what is not there…” depicting creatures that are worryingly increasingly absent from our lives. But, whilst we have a Red List for birds and mammals, Sarah explains how no such warning call exists for invertebrates – it’s estimated that we have lost around a third of our moths since the First World War. For nature, it is the common things that really matter when it comes to the long term survival of our planet’s biodiversity, and in creating their portraits, Sarah says that she has “…never been happier in [her] work, and sure of [her] footing.”

‘To draw is not only to measure and to put down, it is also to receive. If, and only if, the mind and its desires can be still enough to allow the period of drawing to reach an intensity of looking, one becomes aware of an equally intense energy coming toward one.’ – S.G.

I like to think that I’m attentive; that I notice changes in the natural world around me. I’ll spot a bramble gall here, a wild orchid there; I’ll even hear a greenfinch at 200 paces… etc… but, I normally do it as I’m heading somewhere. I’ll be walking the dog, or bee-lining to the postbox before the end of play. True, I pay attention, but whilst at a fast pace. Too, much, haste.

Coming away from my Devonshire discussion with Sarah – having been plied with homemade bread and butternut squash soup, having heard her tell of a life that had to learn to take time to be attentive – I had an overwhelming urge to act accordingly instantly. There was not time to waste! I wanted to walk the one hundred miles home. I longed to take the lengthiest route; to permit myself days and dead-ends and discover the dwelling points of South Devon and the secrets that sit across all of Somerset. But, sometimes life disallows a lengthy pause. Back into my little car, speeding to reach home before nightfall; the pleasurable duty lay ahead of reading the requisite number of stories about cheeky squirrels and petulant crocodiles. It was a little girl’s opportunity to be attentive that night. Once she had fallen; I sat outside for an hour watching the bats eat the moths attracted by the lights of a nearby farm. Poor moths; dutiful moths.

I need to slow down. I want us all to slow down. Perhaps we cannot all communicate and respond to our natural world as Sarah does; but I think we owe it to ourselves and the habitats that support us to at least try (from time to time). I hope this interview inspires you all to take a beat.

This will be the third time in this series that Extinction Rebellion and their protest in Oxford Circus have been mentioned; George Monbiot was arrested there, Swampy had many friends who too found themselves taken away to police stations, but I find it rewarding to share the voice today of someone who was aware and nearby, but not directly involved. There are many ways to draw people’s attention to our planet’s wonders and our planet’s woes. If we are to save our planet, it is going to take all kinds of people doing all kinds of thing, and we will need them all to be attentive to the changes that are happening all around us.

Mark Carwardine: On the realities of anti-poaching patrols & his conservation heroes