David heads to Brighton to discuss the juncture of Art and Science with artist, explorer and science communicator, Beatrice von Preussen 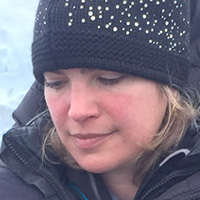 In her Brighton studio, the artist, explorer, science communicator and self-professed ‘child’, Beatrice von Preussen, explores her obsession with “little things”. Whether tadpole, snail shell, wax-worm or fossilised prehistoric crustacean, Bea explains how it is the small things that have made her dream big.  Here she discusses her journey to the arctic – where she spent weeks alone during the sun-drenched midsummer, armed with pencils, paper, (an emergency rifle for polar bear repellant), and the dream of using the world’s most-northerly printing press. But whether etchings of newts, or being invited by the Spanish army to explore an active volcano in the antarctic, it is the joy of story-telling that inspires her, and drives her to teach the next generation about our inspirational planet.

As far as I am concerned, without art, humanity would not have an understanding of science. And, it goes without saying, without science and nature, the opposite is true – there would be little graphite in our wooden pencils. Imagine Da Vinci’s technology without illustrations, Darwin’s discoveries without a comprehension of colour, Anning’s fossilised discoveries without the human potential for abstract artistic thought…

Bea illustrates this better than most – I mean, do you know anyone brilliantly mad enough to attempt to take a printing press to the North Pole in the interest of both art and science?! I rest my case.

But she’s not alone. Later on in this series – looking from the opposite clifftop – you will hear me talk to a scientist who runs an “Arts-Science Interest Group” at the Natural History Museum. It is a body of scientists who are interested in using the arts as a way to further express their exploration of the scientific world. But, you’ll hear that episode in a few months time.

Bea and I have shared a number of emails since we recorded this month’s episode. Her child-like (and I mean that as a compliment) curiosity knows no respite. In one particular exchange she shared how she wanted to explore how nature can effect our wellbeing, but with her assessment of the improvement being captured through an artistic lens, rather than a purely scientific one. It struck me that Bea was making a beautifully simple point; that when it comes to quantifying one’s “wellbeing”, using words and creativity to express one’s feelings would prove far more effective than just a series of numbers.

The role of a Science Communicator is becoming an increasingly important one – one with huge responsibility. With a news cycle full of airborne diseases, climate changing emissions and exoduses of humans across the planet, the common man is dependent upon the translation of complicated datasets. Illustrative intrerpretations of tragedy are vital to expressing the development of society. A bar graph, in the right hands and carefully expressed, can be as emotionally debilitating as a poem. So, when it comes to something as vast and terrifying and complicated as the collapse of our planet’s interwoven biodiversity, or climate change – things not easily captured in a pie-chart – then perhaps a dance protest or a freely-distributed graphic novel or a piece of agit-prop theatre becomes arguably the only way to truly convey why we should pay attention.

Whether a science-communicator who aims to inspire our children, or those that are holding a mirror up to destructive global conglomerates, it seems simple to me… for our species’ survival, we need ‘Beas’.