Dr Trevor Dines: Nobody ties themselves to buttercups 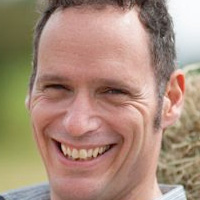 Despite being raised in the fields of England and having slept upon the Rainforest Canopies of Cameroon, Dr Trevor Dines’ heart is intertwined with the flora of Wales. Recorded in his own personal Wildflower Meadow in North Wales’ Conwy Valley, this interview charts Trevor’s journey from the youngest member of the Wessex Orchid Society (when only still in single digits) to one of the inspirational forces behind the UK’s largest botanical charity, Plantlife. Trevor has written books, presented a television programme for Channel 4, appeared on the likes of BBC’s Countryfile and Springwatch, and prior to that, he spent 6 years manifesting the ground-breaking “New Atlas of the British and Irish Flora” – collating nine million records to map over 4,000 species of plants in the wild. It’s hard not to agree with Trevor, that: “I think you’re born a botanist.”

In the first of two episodes, we explore the importance of cattle and other creatures as vectors to help plants survive climate change, discuss what exactly a “Wildflower” is, and how when Trevor enters the countryside, it’s “…like going to a party, meeting friends, family, and sometimes exciting unexpected strangers…!”


In the second part, Trevor goes into further detail about the sheer power of community science when documenting our nation’s flowers. Our understanding of British Flora – and indeed that of the BSBI (Botanical Society of Britain and Ireland) – would be nowhere without keen amateur volunteers. Spotlights are shone upon plants like the “Meadow Maker”, Yellow Rattle; upon different “wild” habitats like Knepp and the New Forest; and also upon lichens and how Trevor regrets “…not looking at mosses…” when younger. Similarly David and Trevor discuss the challenges of re-wilding – how habitat management is far more complicated that simply doing nothing – how, for rare species, it can often be better to carry on doing what you’re doing: “If the plants are there, they’re there because of what you’re doing” Also, they discuss #NoMowMay, the “Trevor Dines Effect” and the multiple reasons the Welsh might have started growing hemp 8000 years ago…

Like many, I have been participating in “No Mow May” ever since I’ve had the sole care of a garden. I have also encouraged some of my family to follow suit – a few of which followed this month-long exercise by dedicating parts of their precious lawns solely to wild flora and wild fauna from that point forward. Replicated across the country, this simple practice is having a significant and (hopefully) lasting benefit to our nation’s biodiversity. And this is down to Trevor.

There is much more praise one can lay at Trevor’s feet, but this seems to be the one thing that will endure in popular consciousness. It is simple and effective, and a sublime springboard from which one can grow one’s conservation endeavours should they wish to.

But, is it too little too late?

The thought of Trevor’s that has lingered in my mind since that sweltering visit to his meadow last August, is that he lives today, with the plants that surround us now. He is not trying to recreate or mourn the past (indeed, he has only truly recently started to worry about progressively drier springtimes.) His endeavours are spent protecting that which we still have. His meadow is propagated from extant seed stock from existing (albeit “historic”) meadows. There is no re-wilding or re-introduction or even re-engineering. His meadow is a continuation of what we already have – albeit significantly less of than what we had in days gone by, and, yes, it is managed in a manner that may seem “old fashioned” to some.

Hopefully, as devoting fields for flowers and bugs becomes trendier than devoting them to beef, we will soon see far more people follow in Trevor’s footsteps. Then “old fashioned” land management may be more appropriately defined as “re-prioritised” land management. Both old and new agricultural methods create crops and foodstuff – albeit to differing levels of productivity. Both also support nature and biodiversity – again to differing levels of success. “New” favours increased output by minimising the sexy chaos of nature. “Old” didn’t have that choice, and so let nature run a-mock. And humanity benefitted from this progression, for a while. But as rivers run dead with chicken shit, and fields become herbicide & pesticide-rich deserts, the “old developing into new” didactic has run its race, and we’re now presented with a choice; the choice of prioritising food production or nature (or indeed of prioritising crisply mowed green garden lawns over something a little messier yet full of life.)

For a bonus treat, watch the below mini-series to get to know Trevor’s meadow in greater details: