Over a glass of homemade cider, journalist, writer and environmentalist, George Monbiot, joins David in discussing what is needed to keep the planet fed and healthy 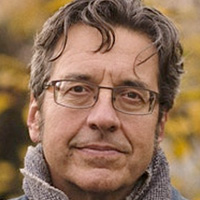 George Monbiot is a prolific writer and journalist, known particularly for his environmental and political activism. But, this episode – not simply about his being beaten or arrested for his political views, or indeed about the time he was stung into a coma by hornets or when he actually died (according to a Brazilian newspaper) – is about fixing our follies and feeding our future. Over a glass of George’s home-brewed cider, David and George discuss the possibility of a ‘regenesis’ – a revolution in understanding how our food is made, how our planet’s population is fed, and how reimagining “the most destructive force ever to have been unleashed by humans” (farming) could help re-wild our countryside too in the process. Could the bacterias in our soil help feed the planet twice over, in two dynamically different ways? Do we truly know what’s going on beneath our feet?

Yes, it espouses well-trodden ground about reducing meat consumption and favouring a plant-based diet. Stuff you all know (or should know), but stuff most of you probably only partially adopt as personal practice. It also talks in depth, ‘scuse the pun, about the importance of the soil beneath our feet and how little we actually know about it. But, more importantly, it aims to dispel myths and expand the dialogue surrounding much needed, and massive, agricultural reform.

Questions posed include: How is our food created and transported across our planet? What does this ‘cost’? What damage does this cause? Is it resilient and sustainable?

What is the reality behind solution-seeming Organic farming and/or shopping locally at farm shops? Are meat substitutes the future? Could there be better ways to create the fats and proteins human life requires *cough* fermenting bacteria *cough*?

And perhaps most importantly, is a change towards securing our food chains led by the producer, the consumer or political will? It’s a bold book, one that will hopefully do much good. But this brings me to my second thought…

Will people read it?

Supposedly, this new book has led to farmers decrying George’s “anti-rural agenda“. George, as is clear to anyone who listens to this interview or reads his book, has a deep love for the countryside. And when he is at odds with modern agriculture, I would suggest it belies an anti-establishment agenda, rather than an anti-rural or anti-farming one. And, to be honest (with one exception that springs to mind, who you can hear speak here), most farmers that I know are so busy farming that I doubt they would have had time to read George’s book anyway… doubly so considering the book had yet to be released at the time the Daily Mail decided to report the outrage of seemingly the entire British agricultural establishment!

But, if I were a farmer, I don’t think I would necessarily choose to read his book – despite much of what is in it being aimed at exactly what ‘farmer me’ hypothetically does. George’s weekly newspaper column, and his recent arrest alongside Extinction Rebellion, confirm his strong desire for wide-reaching social change. He is well known for it. And that’s the problem. Perhaps he’s too well known for it. He and his views are caricatured in the right-leaning press. I fear the good that is in this book will not reach the eyes of arguably those that need to read it most; those in government, and those that are bound to government subsidies. George’s continued research, that which went into this new book, is pre-cursed by how he is pre-conceived. But, to his credit, this doesn’t seem to slow George down one bit. Rather it hardens his resolve.

“The People’s Press”. The bottle of George’s cider we so very much enjoyed during this discussion.

Truth be told – and I am someone who agrees with much of George’s social and political agenda – ahead of our meeting I too expected a certain amount of soap-boxing and politics to trump genuine environmentalism. This was not the case. I felt a kindness and gentleness to George – and that’s not simply the scrumpy talking! He went out of his way to talk to me at the end of a very long day at work. There was a compassion and generosity sat across from me that seemed at odds with both the galavanting adventurer of his youth that I had read about, and the political veracity and dogged determination of his newspaper columns. His ardent desire for change – both environmental and social (can you extricate one from the other?) – seems to stem from hope, rather than pessimism and anger. It was refreshing and exhilerating.

I believe it true to say – regardless of how your political leanings colour the facts – without a diverse, resilient and sustainable global food supply, our growing population is going to run out of planet to live upon and to harvest from. As such, George’s agenda, set out clearly in his penultimate chapter, is an actionable starting point. It will certainly take time to change how we do things, and it requires a whole heap of will – but it is actionable. I believe, whole heartedly, that George’s regenesis is a great starting point for our future.

Rebecca Speight: The Overstory and Understory of the Woodland Trust

Polly Morgan: Form and colour rather than life and death