Doug Allan: A witness beneath the waves on World Manta Day 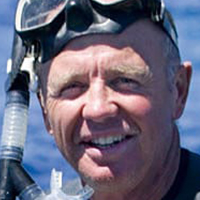 Happy World Manta Day! To celebrate the wonders of our ocean’s Flappiest Friends, this special episode explores the experiences and encounters of Manta Trust patron and legendary explorer-cameraman, Doug Allan. Described by Sir David Attenborough as one of the world’s greatest natural history cameramen, Doug Allan’s work speaks for itself. In fact, head to our website now to see some footage of both Doug and Manta Rays in action. In this discussion, David Oakes discovers how, although training to become a marine biologist, Doug truly learned to dive by harvesting fresh-water pearls. Doug has spent roughly a decade living in the Antarctic, readjusting his internal thermostat suitably to openly profess that his “ideal temperature” is a barmy -18℃! As well as Manta Rays, Doug has had close encounters with Polar Bears, Orcas, Narwhals, Emperor Penguins and more (indeed he almost had his brains sucked out by a Walrus), but it was life on Everest that truly struck him to the core. Doug’s lengthy experiences in the most extreme of environments, and at our planet’s poles, make him the perfect witness of Earth’s changing climate. All this and an introduction from Dr Guy Stevens, CEO of the Manta Trust, to tell us how Manta Rays are getting on at the moment.

I trekked across Ireland – through wind and rain and roads nigh-unpassably smothered with sheep – all to talk to Doug on the farthest western coast of Connemara. With a microphone in one hand, and a 16 year old bottle of whiskey that I’d brought along with me from Wicklow in the other, I was thrilled to get a chance to know the man behind the images that have shaped my perspective of this planet of ours. If you watched “Blue Planet”, you know Doug’s work. If you watched “Planet Earth”, you know Doug’s work. It’s almost as simple as saying: “If you’ve heard David Attenborough narrate a documentary, then you’ve almost certainly seen Doug’s work!” His CV is prolific, his awards cabinet is stuffed (despite the best efforts of England’s criminal fraternity), and what better way to sum him up than by a taste of his work, and as it’s World Manta Day, here’s an example of Doug doing what Doug does best:

And if his genius wasn’t clear enough from that clip – for comparison, here’s me giving it a go! This footage was filmed coming back from a dive with Nicole Pelletier, of The Manta Trust, and we happened across a surface feeding Manta Ray a short distance off a reef on Laamu Atoll in the Maldives:

There’s a great deal to take away from a man who has spent hours waiting and watching. In his own words:

I spent many hours with Doug (and the aforementioned bottle of whiskey) discussing what he had learned from his hours on the pack ice, and what changes he had witnessed upon repeat visits across 4 decades. Unsurprisingly, he has a belief that the planet and its inhabitants are suffering. But, he does see some potential glimmer of hope – a way to salvage some future from the current spiralling predicament could be through DAC technology, through direct air capture. It’s early days in the technology’s development, but, if not the whole part of the solution, I find it hard to disagree that removing carbon dioxide from the environment is a key aspect for our survival. That said, we must temper our addiction to spaffing CO2 out into the world. Personally, I fear changing human mindsets en masse is much harder than designing DAC machines. But – time will tell, and Doug will be watching.

Jacques Cousteau by “The Silent World”