Will Travers OBE: Born free and committed to compassionate conservation

David Oakes talks to the president of the Born Free Foundation, Will Travers OBE, about why it is the responsibility of humanity to protect our planet's animals. 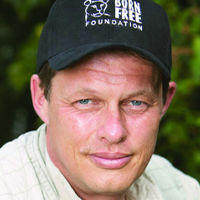 Will Travers OBE is one of the UK’s most influential animal rights activists, founding the Born Free Foundation in 1984 with his parents, originally under the name Zoo Check. As most of the world has been placed under strict lockdown and quarantine rules, we’re beginning to get a glimpse into what life must be like for animals trapped in zoos, forced to live in confined spaces under lock and key “for not much more than our own amusement”. Born Free’s latest campaign, “Creature Discomforts”, tackles this issue with the help of the animators at Aardman. Will talks about the distress and anxiety caused to animals when they’re not allowed to roam their natural habitats, and how we’ve “distorted and warped” our relationship with wild animals. Later in the conversation Will discusses the reprehensible poaching and canned hunting industries, and the threat they pose to animals like Lions. The discussion moves onto the life of George Adamson, the realities of filming “Born Free” in the sixties, and the financing of wildlife protection, before ending on a note about Will’s late father – his ever-present guide to knowing what’s right and wrong in the world.

This interview is released as one of three “Conservation Conversation” episodes, they are:

It’s hard to come away with much positivity from conversations like these. The scale of worldwide “wildlife crimes” and their impact upon the planet is daunting. But perhaps the nugget of joy to hold on to is in knowing that there are people like Will, organisations like Born Free and that there are many projects being supported internationally. People are still fighting day in and day out to protect our planet’s ecological infrastructure.

Next week I’ll be bringing you an interview with Georgina Lamb, the chief executive of the David Shepherd Foundation; a conversation that walks a parallel path to that of Will and Born Free – two tales of forces for good, both trying to preserve the environment’s holistic interconnections. But as these dialogues continue, I become ever aware that the threat isn’t simply “man”, but that the threat is the rival web – that of societal connective tissues. If holistic biodiversity is keeping us alive, it is the man-made interweave of politics, finance and business that produces the threats to our existence. Man isn’t totally selfish and entirely devoid of compassion – indeed, it is through video campaigns such as the one above that we can be reminded that mankind can stand together as one, and united alongside the biological processes that keep our planet functioning.

I am also not saying that the organisations and infrastructures that we’ve constructed to support modern life are evil, far from it, they are neither good nor malicious. Indeed companies often champion charitable goals, and governments can enact world changing legislation. Businesses can (and indeed must) be remoulded or cajoled in such a way that they support the planet. And it is often movements like Born Free and David Shepherd that can speak loud enough, and with suitable authority, to successfully lobby worldwide governments and international conglomerates to work with, rather than against, the planet.

Change is slow, but that is because the change that is required leeches into so many aspects of the global community. For example, we cannot conserve wildlife without also tackling famine and poverty in our planet’s poorest regions. Similarly, we cannot enact global climate change regulations when governments would rather enact trade wars and actively inflame social divisions. And this is why Will doesn’t talk purely of “conservation”, rather he chooses to speak of “Compassionate Conservation”. For, without compassion, there really is no end in sight.

Photography of Lions used to promote this episode were taken by, and kindly provided by, the inimitable David Fettes – you’ll recognise the name from an interview we conducted with him in season one. Why not listen to that episode next?