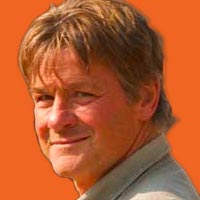 David Fettes is technically a wildlife photographer but is far better described as a force – and primarily a part – of nature. Growing up in India and in England, surrounded by snakes, langur monkeys and even more baleful creatures, he has stretched the definition of “self-taught”. An initial career in curiosity led to a mandatory career in management and insurance, before he landed, feet-firm, in what proved to be his destined vocation. His work has featured in the Natural History Museum’s Wildlife Photographer of the Year exhibition and in magazines worldwide. In this in-depth conversation, he explains why he’s dedicated to educating children on where we fit into the ecosystem, argues that relying on technology has encouraged photographers to be “lazy”, and pleads for listeners to immerse themselves within other cultures, other species, and a more tolerant world to break down our woeful human misconceptions.

I first met David at a 30th birthday party in Barnes – he was godfather to the 30 year old in question. David was joking that his wife would still be talking long after he’d said all his farewells, so was lingering a while to banter with me before heading off into the night. Needless to say, long after his wife had finished her goodbyes, David was still rabbiting on to me. A short while later, the birthdee’s wife suggested that David might make a suitable candidate for my upcoming podcast….

It’s worth noting at this point that many of my friends and family have recommended candidates for “Trees A Crowd-ing” – Auntie Rita who “has a lovely garden”, or the nextdoor neighbour “who does something with bees”. Subsequently I’m always a mite tentative when a recommendation comes in, and my vaguest of criteria for initial consideration has become, are they: (a) a person of note in so far as how they’re related to the Natural World, and; (b) are they fantastic to sit down with to talk to for an hour.

When I was informed that he had been a finalist at the Natural History Museum’s Wildlife Photographer of the Year, I made a mental tick in the “(a) box”, tried to suppress my glee, and politely asked if David and David could be introduced formally by email.

Prior to recording this interview I spoke with David on the phone about his life. After speaking for 45 minutes his life story had still only just reached his 40s and he was yet to head off on his first safari and yet to pick up a camera! Believe me when I say that the interview that you will hopefully now have listened to only scratches the surface of what he knows and cares about.

For example – I wish I could have recorded David’s comments on Trophic Cascades – INCREDIBLE – I aim to interview a specialist on this subject at some point over this podcast’s lifespan, and draw you into the mysteries of our incredible and complex ecosystem.

Anyway, I’ll leave you for now with some words that David wrote to me following our recording:

“When I do talks to children, and adults if they are still awake at the end of a talk, I always leave them with a saying of the Haida Indians (North West America) which, if you have not heard it before, is I think apposite to our conversation:

“We do not inherit the land from our ancestors,

We borrow it from our dependants.”

Post Script: Although I would hopefully be the first to correct my own mistakes, I wouldn’t normally highlight an error made by a guest on the show, especially when everything else they uttered was so mesmerisingly powerful and erudite. BUT… as it was a friend of David Fettes’ that brought it to his attention (and then to my attention), and that the truth underlying an incorrect assertion is so importantly harrowing, I thought I should include it here. (David – I still think you’re the bee’s knees, honest!) So, it is the Northern WHITE Rhino which is imminently about to die out. The last male, Sudan, failed to breed on Ol Pejeta Conservancy in Kenya. The population chart makes for very sad reading, from est. 3000 individuals in 1909 to only 2 (both female) in 2018…:

Many thanks to Toby Warren for highlighting this horrible reality. May we never stop learning from our mistakes.

THE WILDLIFE PHOTOGRAPHER OF THE YEAR:

ARTICLE – “The keeper of the last male northern white rhino”:

CURL-EW-PHORIA! Why the duck is everyone wacky about this wonderful wader?