David travels to the Isle of Man to meet "The Man of La Manx-a", the Horticultural nurseryman, scuba-diver and head of the Manx Wildlife Trust, Mr Leigh Morris 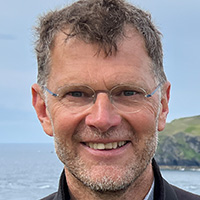 Midway through the Isle of Man’s Manx TT motor-racing festival lies a day (terrifyingly aptly) branded as “Mad Sunday”. David Oakes chose this bacchanalian festival, one filled with inebriated petrol-heads and super-charged exhaust eruptions, to talk with the Manx Wildlife Trust’s CEO, Leigh Morris. Recorded in perhaps the only two quiet enclaves the island possessed that Mad Sunday, Leigh expands upon a journey that took him from horticultural nurseryman to the head of a Wildlife Trust that oversees the planet’s sole Unesco whole nation biosphere. Leigh’s journey – starting simply enough in Yorkshire, then Wales and Scotland – quickly expands into a life of volunteering and vocational placements in India and Nepal, Ethiopia and Oman, the Galapagos and St Helena… the list goes on. Whether upon an island paradise or beneath the waves, there is seemingly no habitat that hasn’t drawn Leigh’s attention. In his own words: “The more you know, the more you know you don’t know…” Armed with an insatiable curiosity, Leigh hopes to turn the Isle of Man, all 35 by 10 miles of it, into “what good looks like”. In this episode we discusses the sex-appeal of carrots, the rivakry of a petrol vs. electic (or even hydrogen) powereded TT, community conservation movements such as SeaSearch, and the hot potato of viewing agriculture as a very necessary part of our species’ ongoing environmental ambitions. Filter in a menagerie of rare Loaghtan sheep, Penguins, Sea Iguanas and the Isle of Man’s escaped feral Wallaby population, and you have a gloriously ambitious discussion about the state of the world, and where to take it next. Oh – and October’s episode is not sponsored by the Visit Isle of Man board… we promise!

One of the advantages of being an ambassador for the Wildlife Trusts is that it gives my podcast direct access to a seemingly inexhaustible stockpile of amazing guests. Guests from all corners of the British Isles, and from all aspects of the environmental agenda. So, why did I choose to go to the Isle of Man?! (I jest, obviously.)

Shipping routes from Scotland to Northern Ireland, and routes from Ireland to Wales and England, all seem to deliberately avoid the Island. “Here be Monsters!” these shipping routes seem to imply! As such, it’s a land of tax exiles and tail-less felines that would not seem out of place within John Mandeville’s travels. It’s a land of mystery; a veritable island of adventure! Why wouldn’t one want to go there?

I was based in Dublin for much of this year – there filming further for Netflix. I thought a quick ferry trip across from Dublin to Douglas would not only be simple and easy, but would scratch my long-held itch of wanting to visit the IoM. I had very positive preparatory discussion with my contact at the Wildlife Trusts. I then selected a perfect time for my visit – a long weekend break amidst my filming schedule that would not only provide me with plenty of time to explore the island but also allow me to remain within the COVID-mitigation protocols set by my TV show. Everything – everything – seemed perfect and straight forward. It was only after I spoke to Leigh, and he mentioned something called “Mad Sunday”, that my perfect plan started to unravel.

The Manx TT motorbike racing festival sees the roads that encircle the island turned into a deadly race course. (4 people had already been hospitalised, a number of which sadly passed, prior to my arrival.) The course is just shy of 38 miles long, and for a fortnight professional bikers race the track. Peter Hickman currently holds the track record. He completed the circuit in 16 minutes and 50 seconds. To put that into context, that means maintaining an average speed of 135 mph…! On thin country roads, on a motorbike, with hairpin turns, and lumps and bumps! Utter and sheer total madness.

But it is the middle Sunday of the festival that is known as “Mad Sunday” in particular, and on this day no racing takes place. Instead, the roads are re-opened to the public and the thousands of spectators and petrolheads, there primarily to watch, jump on their personal bikes and set out to emulate their heroes. The island, smelling of beers from the night before, throbs with tarmac that sound like burning rubber and hums with the smell of exhausts backfiring.

It transpired that I had inadvertently arranged to meet Leigh – to talk about agricultural policy, wild orchids and seal life – on Mad Sunday… oh, and not to mention that the Manx TT had been suspended for the previous two years to accommodate COVID and so this year it was especially vibrant. But undeterred, somehow – and no-one can believe quite how – I found the sole remaining spare room on the island, and set about priming my line of questioning.

The Manx Wildlife Trust, and indeed Leigh, are based on the west of the island, in the town of Peel. But Douglas is the island’s capital – the largest town on the Man – and this is where I had chosen to stay. (Actually, it is not a town any longer. Moments before I arrived, Douglas was finally appointed a city – the smallest city in the UK). Sadly, Peel it turned out would have been a far more desirable place to rest my head that night, for in preparation of the madness of the looming Mad Sunday, Madness were playing in a venue next to my hotel… oh, to possess the heady heights of imagination as he who booked Suggs to headline Mad Sunday! No doubt they’ve already booked Neil Hannon’s band to play at their funeral… Needless to say, all attempts to sleep were met by the a-sonorous bellowings of the baggy trouser brigade.

Leigh and Hannah (Manx WT’s newly appointed Community Ranger) picked me up early on MS in the Wildlife Trust’s branded electric van. It was a damp morning; but knowing that the day ahead would require the van to circumnavigate the whole island, and afraid we could run down the van’s charge too much, Leigh only intermittently used the windscreen wipers, banished heating from our thoughts, and point blank refused to turn on the radio. Although, I swear I could hear him gently humming Madness songs from time to time…

We parked up down by the Calf of Man – a small island and bird sanctuary just off the south western coast of the main island. Here we met the trust’s engagement officer, Graham, who was to be our film crew for a video we were to produce for the Wildlife Trusts. Whilst we waited for Graham to get his equipment set up, we scanned the horizon for seals, choughs (which are really only found elsewhere in the UK on the Welsh and Cornish coasts) and basking sharks. Sadly, the latter was not in attendance that day, but the visit was no less satisfying. Leigh chooses to Scuba dive not far off the coasts here too, and says there is much of interest to see. For this, and many other reasons, I look forward to my return trip.

Upon finishing our recording, the car park and adjoining coffeeshop was now fit to bursting with leather clad bikers. The two trust vans were the only vehicles in the car park with 4 wheels, and Leigh’s was certainly the only one not reliant upon an internal-combustion engine. Anyway, it is from here that we headed off to Fort Island Gully, and then to Close Sartfield (travelling upon the Manx TT course at a sedentary battery-saving 30 mph), and much of the content of our discussions make up this month’s episode. I hope you enjoy it.

But, following our Wallaby encounters at Close Sartfield, Leigh and Hannah took me to one final nature reserve on the Island – the island’s smallest; one nestled into a community of houses. Whether bird observatory, seagrass patch, wild orchid meadow, or a community park to be used by humans on a minute to minute basis, Leigh and the Manx WT seek to make the most out of each of their sites. And (although perhaps it’s illusion brought on by the clear island boundary and the size of the landmass) it seems genuinely like they’re winning. It appears that their steps forward are steady, positive and enduring, and that the island is indeed “What good looks like.” However, whether the successes of an island model for a Wildlife Trust are scalable is another question altogether. I imagine and hope much is. But, for the time being, it was truly joyous to have felt like we’re winning the nature battle in some places. Because…

…right now, many of the securities that are in place to protect our wild spaces are being destroyed by our incoming government. Whether it is by allowing fracking, for example, or revoking (and not replacing) EU environmental policies, or scrapping the agro-environmental policy known as ELMS (which we talk about in this very podcast), Truss’ Conservatives look set to cause unimaginable damage to our country’s natural identity. If you would like to help our representatives see sense, then please follow this link:

Leigh and David by the Calf Sound – https://youtu.be/c1E4x5AKxMM

Dr Bryce Stewart: The man who writes his phone number on lobsters