David talks to Irish Naturalist and Writer about his ongoing plans to extend a patch of native woodland in County Wicklow, Ireland 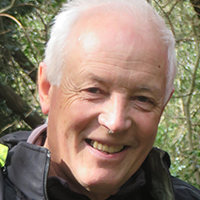 Richard Nairn is an environmental scientist and naturalist with a lifetime of experience in applied ecology, conservation and learning from the wild world around him. Having recently purchased a piece of ancient native woodland in County Wicklow, Ireland, here Richard shares the lessons these woods have taught him. From the importance of woodland management, to the vitality deriving from a community’s support (or ‘Meithal’ in Gaelic). These woodlands have proved a bottomless source of Wisdom; knowledge otherwise hidden in the secret pollen records of nearby peat bogs. With only 2% of Ancient Native Woodland remaining in Ireland, Richard is preserving this heritage for generations to come. Richard and David discuss the catharsis of woodchopping against Seasonal Affective Disorder, the value of peat, how the Pine Marten is in cahoots with the Red Squirrels against the Greys, and how Ireland has recently seen the return of Woodpeckers, White-tailed Eagles and even the occasional lesser-spotted human who places value upon nature and woodland.

Having read his book, “Wild Woods”, and taking a day out of my schedule chasing Vikings for Netflix, I was delighted to receive a guided tour of Richard’s woods. This interview was recorded back in November of 2020, but I’m delighted to be releasing it now, listening to us talk of the importance of Peat bogs, only weeks after the UK FINALLY banned the sale of peat-based compost in the UK (or at least, from 2024 they supposedly have.) Listening back to this episode, months after pressing ‘record’, I am struck by how Richard opens up as we explore the further intracte reaches of the wild world he inhabits.

We met the morning after an horrendous storm – a storm that had destroyed the poly-tunnels his daughter Hazel uses for their community farm. I arrived to the sight of father, mother, daughter and son-in-law all pitching-in to recreate what had been there just hours before. Nature can be a b*stard at times…! But, how human beings roll with it has equal importance. If we are to learn to live with nature, we must learn from nature – even when most lessons are hard learnt.

Much of what Richard and I talk of here is about heritage. The farming practices of neolithic man, the reduction of native woodland to 5% during the Tudor times, the use of timber to make things of social and cultural importance (not just chipboard), the woodland policies of Samual Hayes at Avondale, and even the legacy Richard himself has passed on to his nature-loving children… the list goes on. But all these moments are interconnected by bored woodworm tunnels – tunnels etched with the themes of loss, of forgetting and of what should always remain important to these lands.

Fundamentally, Richard speaks of the lessons present within the need for accurate communication and diligent preservation across time – the transmission of “what we have now” to those who otherwise won’t realise what they would have already lost.

Nestled, as this episode is, within my exploration of what is special about the trees native to the British Isles, I hope hearing Richard speak – as a man who has built a forest around him – adds to the life-affirming power of tradition, of heritage, and most importantly, of our natural world. These are the lessons of our native ancient trees.

Rob Rose & Natalie Stoppard: Food as a by-product of conservation at Rosewood Farm