Lost on Lundy: The hidden treasures of a wildlife landmark

David escapes the British mainland to explore the wonders of Lundy with the island's two widllife wardens, Rosie Ellis and Stuart Cossey 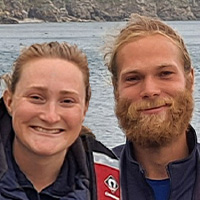 Since the late 1960s, Lundy Island – just off the north coast of Devon and measuring only half a mile wide at its widest point – has been owned and operated by two British charities; the National Trust and the Landmark Trust. Prior to this, Lundy was owned by wealthy megalomaniacs, pirates, gamblers, revolutionaries, neolithic fisher-people, and a whole array of wildlife. In this week’s episode, David Oakes visits Lundy to speak with the island’s current wildlife wardens, Rosie Ellis and Stuart Cossey. Rosie, a marine specialist, enthuses about the marine protected areas and no take zone that surround much of the island. These are waters that harbour grey seals, minke whales and basking sharks, as well as spiny lobsters, sea slugs, and a stunning array of rare corals. Stuart – the island’s resident “bird guy” – explains that despite being named for one of the island’s most colourful avian inhabitants (‘lund’ is the Old Norse word for ‘Puffin’), Lundy is actually far more exciting due to its Manx Shearwater population. The majority of the UK’s Manx Shearwaters breed on Lundy, and as such Stuart takes David out at sunset to ring a few of these amazing creatures. All of that, as well as pygmy shrews, the world’s rarest cabbage, and a tale of why Rosie spent much of the Covid-19 lockdown on Lundy walking around collecting animal droppings, and you’ve got a tiny island (and brimming podcast) that punches far above its weight.

Today’s thoughts take the form of a blog written for the Landmark Trust, that was originally published here. Needless to say, I had a fantastic time on the island, and can heartily recommend the experience – each visitor I’m sure would be destined to have their own particular adventure…! Enjoy:

Since before I can remember, my parents took me to holiday in Landmark Trust properties. There are photos of me that outdate my memories: infant-me being wheel-barrowed around the remaining hamlet of Purton Green, toddler-me making friends with the Bovine co-inhabitants of Warden Abbey, my sister and me pretending to be incarcerated at the House of Correction. You can almost certainly go back through the logbooks of each building and see how my handwriting slowly improved (although not by much!)

I especially enjoyed the Landmarks that had treasure hunts secreted into the building’s crevices – hunts created by previous guests, with clues and treasures expanded upon with the arrival and departure of each new inhabitant. Alongside each building’s unique history and heritage, these more recent mysteries kept an over-active imagination sparking. These buildings were time machines for my young mind.

But, one Landmark that we had always wanted to go to – one that had always encapsulated Landmark’s trademark mix of history, mystery and magic – was Lundy. In my mind, Lundy was a Blytonian “Island of Adventure”, one cross-pollinated with a fog-bound Brigadoon. It was an island where anything was possible. And it was an island where child-me could finally come face to face properly with the “Clowns of the Seas” – Puffins!

I have barely forgiven them, but my parents finally travelled across from Ilfracombe on the Oldenburg about a decade ago… without me. I was no doubt off pretending to be some historical cad in a TV Period Drama somewhere (it’s what I do when not podcasting about nature, and is something certainly inspired by having holidayed in Landmark’s Historic Buildings throughout my childhood.) But, to finally find a chance to visit Lundy, and to stay in the iconic Old Lighthouse Upper to boot, in March of 2022, was a childhood goal all too belatedly achieved. And to go there with a singular goal of exploring the island’s wild spaces was particularly refreshing.

I won’t echo here what I discuss in my Lundy podcast, but needless to say, island habitats are famous for hosting endemic species that exist nowhere else in the world (the idiosyncratic Lundy Cabbage and associated weevils spring to mind.) But just as important as these rare gems, is how unique island climates impact how “common” species behave and interact. On Lundy, an encounter with the Blue Tit we take for granted in our garden, is a rare and almost spiritual flash of colour. ‘Why has this little bird flown so far off course?’

Similarly, the supposed final day of my all-too-brief stint on Lundy saw blazing sunshine followed by hailstones, and then a dense snowy fog that meant we were marooned an extra day until a helicopter pilot could be found to rescue us. In Britain, we have (until recently perhaps) forgotten how our personal liberties can be hijacked by meteorology. Island life makes us reevaluate both those parts of the wild world that we take for granted, whilst also harbouring those unique species that would otherwise have gone extinct. From a natural history perspective at the very least, this island lived up to everything the child-me wanted Lundy to be. And the ongoing work of the island’s wardens, and indeed the invaluable legwork provided by the Lundy Field Society across the decades, means that Lundy has been observed and protected, and will hopefully be nurtured and enjoyed for centuries to come.

Enticing Puffins back to the island’s cliff-sides has been a hugely publicised and successful project on Lundy. There are plenty of Puffins on Lundy; I have seen them; they are magnificent; “child-me” is pleased as a puffling. But, hopefully just as successful, will be the work being done to preserve Lundy’s submarine life. For me, the most amazing achievement of the Landmark Trust and the National Trust on Lundy, has been the impact they have had upon preserving the island’s coastlines. I long to dive Lundy’s marine protected areas and no take zone, to see the corals and sea slugs, the spiny lobsters and grey seals, and perhaps even a minke whale or basking shark! Historical inhabitants of Lundy would have seen these seas change: massive shoals of herrings that would have been frequent visitors have vanished, and basking sharks that would have been easily seen year on year have disappeared from the horizon too. Protecting these marine areas is going to provide an amazing opportunity to observe these seas change again.

I think it’s fair to say that the Landmark Trust isn’t about “turning back time” or defining history as a static point. It doesn’t hermetically-seal heritage. Landmark’s buildings are about an appreciation for history by our world’s modern inhabitants. Also, the lack of televisions and wifi – as well as holding back too much modernity – laud the importance of family and community, something under-cherished today. Similarly so, the Trust supports an approach to the natural world which doesn’t strive to simply turn back time, to repair all the damage we have done; rather it strives to nurture that which we still have around us. On Lundy and beyond, Landmark is playing a guardian role in sensitively nurturing our country’s biodiversity. Each project undertaken is done considering goals of sustainability and ecology. Some “Landmarks” are even set within Wildlife Trusts – for example, the Napoleonic “Semaphore Tower” is nestled in the heart of Chatley Heath nature reserve, which is looked after by Surrey Wildlife Trust, and guarded by platoons of dragonflies and damselflies. (I hope it will be my next Landmark experience). All of this is to say, that the rich cultural and natural historical heritage of our nation is far better off for the existence of the Landmark Trust – and it’s not just about the puffins, we humans are invited to be an integral part of it too..

Here are some of the photos I took whilst an inhabitant of Lundy: