Nature-writer, biologist and activist Dr Amy-Jane Beer shelters from the rain with David to discuss creative writing and creative solutions to some of our wilder concerns 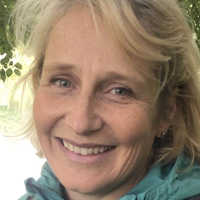 Upon Salisbury Plain – nestled amongst exploding ordnance and dim-witted Tawny Owl fledgelings – the child that would become Dr Amy-Jane Beer found both a love for nature and a love for adventure. Training originally as a biologist, Amy grew into one of Britain’s best loved nature writers. Whether articles in British Wildlife, diary entires for the Guardian’s ‘Country Diary’, or her latest book “The Flow” (which explores our relationships with Britain’s numerous wild water ways), Amy’s writing exposes personal and oft-spiritual experiences to illuminate nature and science for wider audiences. An active participant of both the Right to Roam movement and the New Networks for Nature alliance (the former hoping to unlock the many health benefits attained through access to green spaces, and the latter exploring how creative inspiration can be drawn from British wildlife) Amy believes that a human right to linger, explore and create is “amazing compost” for the mind, body and soul. Amy is a scientist that places great value upon love, upon magic and upon the power of motherhood, as well as upon the intricacies of the radial symmetry of sea urchin larvae! Hopefully she will inspire you to seek the benefits of learning to trespass like a river.

I arranged to meet Amy during a drought. Rain was sparse, whereas record-breaking temperatures were scarily plentiful. Reservoirs were drying out, and even the mouth of the thames had vanished – it now began 5 miles further ‘down stream’. As such, always hoping to create a suitable environment to chat within, I planned to meet Amy on the edge of a brook near Lyme Regis; my hope was to discuss her life as laid out in her new book, “Flow” – a book about rivers, wilderness and wetness. I thought we would talk primarily about water. I even looked forward to recanting, one kayaker to another, my oft-misquoted yarn of how I kept a kayak in my under-stairs cupboard in London, and used it to traverse the mile-long, pitch-black canal tunnel beneath Angel Islington. However…

…on the day we met, the heavens predictably opened. Amy and I sat sheltered beneath a rickety summerhouse as the surrounding countryside was deluged with water. It seemed foolish to start by bringing up the topic of imminent hosepipe bans. And, so we drank coffee, and spoke about everything else. Indeed, having recently ‘down the rounds’ promoting her book, I suggest perhaps Amy found it refreshing to talk about things other than “Flow”. (Needless to say, buy and read “The Flow”. There is a great deal to learn from its pages – for example, why such a deluge of precipitation after such a long period of dry days may not be as simple as just good news.)

I’ve often mentioned the interconnectedness of nature on this podcast. It’s hard to avoid. In this episode you hear the famous quote from the great John Muir: “When we try to pick out anything by itself, we find it hitched to everything else in the Universe.” But, compared to me, Amy seems far more open to that of an extended view of connectedness; one where love stands next to science, and spirituality next to chalk streams. It’s far more holistic than that which I possess. Through life, loss, parenthood and beyond, she seems increasingly committed to a spiritual relationship with our wild world, rather than a purely scientific one. I find that utterly laudable, but I think perhaps I am sadly a little too cynical. Yet, genuinely, I wish I could say that I felt the same. I am always in awe of those that have faith – and not a little jealous. I fear for the World my daughter will inherit. Yet I hope – as Amy suggests – that the love I have for her and for this planet acts as a positive part of what could help sway the entrenched minds of politicians and multi-nationals. I hope, but I do not have faith. We shall find out either way.

(Some of the…) NATURE WRITERS MENTIONED: