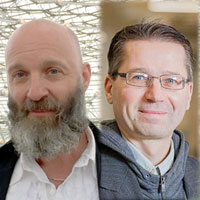 Wolfgang Buttress is an award-winning artist who creates multi-sensory artworks that draw inspiration from our evolving relationship with nature, and Dr Martin Bencsik is an associate professor in the School of Science and Technology at Nottingham Trent University. Together they have become a unique creative force! Here, talking to David, they discuss their initial collaboration, HIVE. At 17 metres tall and now based at Kew Gardens, the sculpture represents the intrinsic relationship between bees, humans and our shared landscape. Their most recent collaboration, BEAM, which made its debut at Glastonbury Festival 2019, is co-produced with Greenpeace, and converts signals from a nearby bee colony and ambient sounds from the surrounding concert stages into light and sound effects to provide an ever-changing soundscape – and a truly immersive experience. If that isn’t enough, they recall when they filled Martin’s wife’s cello with bees… as one does!

I used to live in Crystal Palace – an area of London that took its name from becoming the eventual home for the Crystal Palace created for the first World Fair, The Great Exposition of 1851. The palace burned down in 1936 and in its place today is a bus station. But, remaining hidden beneath the buses is the old Victorian subway built for first class visitors to the palace. Used briefly as a bomb shelter during the war, the site then remained in a state of disrepair; only now is it being renovated so that historians and the wider public can safely revisit the site.

I was fortunate enough to have the opportunity to visit in late 2014. It struck me as a cross between the brick work of the Natural History Museum in London and the Moscow Underground Railway. It is astonishingly beautiful.

It seems artists, scientists, engineers and architects didn’t hold back at the prospect of a World Fair as a chance to show their skills to the rapidly changing world. For instance, public expositions led to the building of Paris’ Eiffel Tower in 1889, Brussels’ Atomium in 1958 and even the disembodied body parts of the Statue of Liberty became massive crowd-pullers to the 1876 Centennial in Philadelphia before eventually being erected in New York.

So, what changed? Why didn’t we have World Fairs anymore? I pondered foolishly. Needless to say, it turned out that we did, and indeed do!

In 2015 I headed to Milan to the World Expo on the topic of “Feeding the Planet, Energy for Life”! The Pavillion that was awarded the Gold Medal for Best in Show was the British Entry, “The Hive”, created by a certain Wolfgang Buttress and Martin Bencsik.

Little did I know at the time that I needn’t have travelled to Milan to see their wonderful structure, as it shortly became installed in Kew Gardens. And little did I know that I would eventually be driving through the British countryside to interview them both about this amazing structure, their personal histories and their future ambitions.

The sound from within “The Hive”:

When I first approached Wolfgang about interviewing him for the podcast, he suggested I also spoke to Martin as well. I hadn’t initially realised that the work had been such a collaborative effort, but I jumped at the chance. This was before I’d recorded a single episode and I was just relieved that anyone would talk to me. But as I drove up to Nottingham to meet them both, I was more than a little anxious about talking to a physicist. I can converse on art and sculpture, on bees and biodiversity, but I had no idea how I was going to come across in an interview with a physicist…

…I’m sure it comes across in the podcast – and I’m sure Wolfgang won’t mind me saying this – but the highlight of the interview for me was hearing about Martin’s many adventures. It summed up what I always wanted this podcast to be about; about people – not always the obvious people – but people who are greatly and eccentrically inspired by our natural world.

THE HIVE at Kew Gardens –

The Plight of Flying Foxes in Australia –

Astrid Goldsmith: Puppets, politics and The Wind in the Willows with extra Wombles