Adventurer Alastair Humphreys takes an hour out from cycling around Yorkshire to talk to David Oakes about some of his many international encounters. 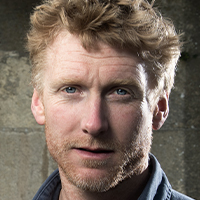 Alastair Humphreys, named as one of National Geographic’s adventurers of the year, has walked, cycled and climbed over seemingly every surface of the planet. He began his adventures in his early 20s, and since then has cycled more than 46,000 miles around the globe. Unusually for a professional adventurer, Alastair is now cutting down on his flights, and finds himself falling in love with Britain’s landscape. As such, we meet him two weeks into his month-long cycle around Yorkshire, where his only goal is to “see what happens”. Although he would quite like it all to himself, Alastair believes the outdoors are something we should all share and explore – that we shouldn’t worry so much about getting out there, living minimalistically and challenging ourselves. Find out how 9/11 and the war in Afghanistan came in the midst of his four year long travels, and how those events, incredibly, almost passed him by. Alastair explains how he’s constantly pulled between wanting to be a hobo, a vagabond, and wanting to find a place he can truly call home – and then once he’s done that, head north to take a selfie on the moon! 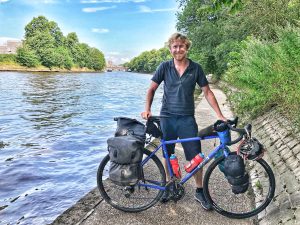 Al is the kind of man from whom you wish to receive a postcard, out of the blue, sporting the most elaborate of postmarks!

I had met people who had had adventures, but I had never met an “adventurer” before. Indeed, when Alastair first approached me, I wasn’t entirely sure if he fitted into the “Trees a Crowd” remit of people inspired by, or dedicated to, the natural world… but, as with all good adventures, what did I have to lose.

We sat on the banks of the River Ouse for roughly two hours. Al was the kind of grubby and happy that I associate with the Duke of Edinburgh expeditions I used to go on as a ragamuffin teen. Ruddy and glowing; tired and truly alive. He was at ease with himself and emitted genuine (intoxicating) passion. He had been sleeping beneath the stars for a fortnight, and had seen more of Yorkshire in those 14 days than I had seen of Yorkshire in the previous 3 months. He was primed to chat, and  similarly, with nothing to lose.

And so we nattered. Happily interrupted by anglers and fun runners, by ducks and even a conspiracy theorist (which (un)fortunately has ended up on the cutting room floor). At times he would challenge me – “Why can’t you sleep outside tonight? You should do it? Why not?!” There was no threat to these offerings, nothing accusatory; rather he was asking me to join him – literally and figuratively – on the adventures that had come to define his life. What could be a greater offering of friendship than that.

We created two podcasts; the one you have just listened to, and one he recorded – here. For me, this act of creation was enough adventure for my day. But, for Al, I could sense that this was just the start – who knew where his wheels would take him next that day.

I hope the COVID19 lockdown hasn’t been too hard on him, for the man who is always moving – that said, no doubt he’s already created a new variant of tomato plant or learnt to play the bassoon on a treadmill, for he did say that he was “learning how to love home”.

Al has seen wonders that many of us can only dream of, met people who transcend expectation – I would feel lucky to live even a fraction of his adventuring. So, I raise my hand, high and proud, to be the first to accompany this kind and open man on whatever adventure he takes next.

Laurie Lee – As I Walked Out One Midsummer Morning